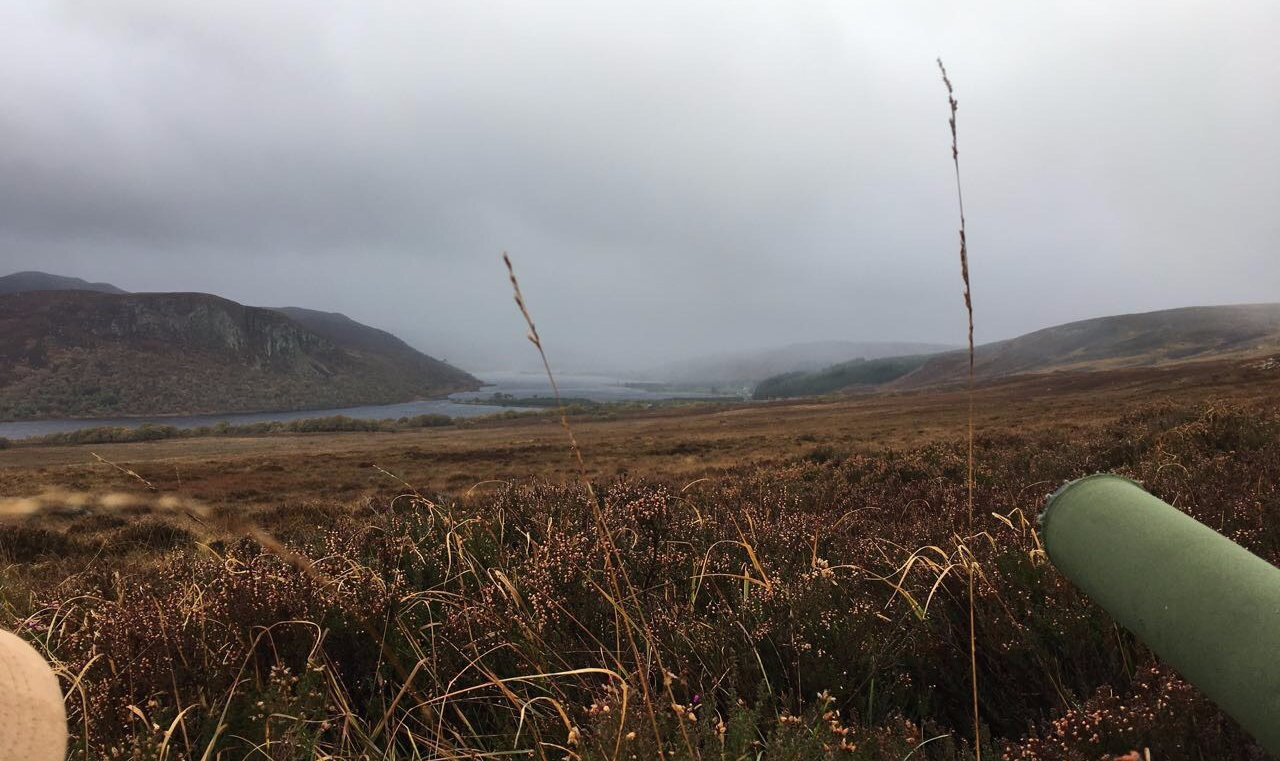 So I wanted to write a post about something I came across yesterday when out hunting, but before you read further, you should be aware that this post contains photographs of a shot deer, various images of the carcass, and of the postmortem dissection of the jaw.

This is purely for educational purposes to demonstrate a condition that can affect older deer, and out of no compulsion for a “trophy” photograph.

I believe it is important that those managing deer professionally, or those hunting to put meat on the table, are made aware of various more unusual aspects of deer biology, both for interests sake; and for the safety, well-being, and ethics of all concerned.

The animal in question, due to emaciation, will be left on the hill in order to sustain wildlife in this bad weather over the next few weeks. This is not common practice, but due to the high standards of the venison and game industry, there is a high chance this animal would be condemned by the vet at the game dealer. As it is, she will no doubt benefit a nearby badger set, other mustelids, the odd fox, rodents, birds of prey, nearby birch trees, aspens, and wood anemone. I’ll set a trail cam up nearby to watch the process.

OK, on with the story.

I shot this hind yesterday, on the edge of some birch woodland. Personally, I believe if she hadn’t had access to shelter from the weather, she would not have lasted this long. You can see from the photo below, a couple of points of concern, from a deer managers perspective:

– the distinct lump under her jaw

– a rough, ‘starey’ coat (never a sign of good health in any animal)

I will say, first and foremost, that I believe this deer was in generally good health, and was acting normally. If I had had any concerns at all, after dispatch I would have carried out a basic health check, and if I had found indicators of any notifiable disease, would have contacted the relevant authorities immediately. As it stands, her condition is down to age, which I will detail later on.

So, the first item of concern to investigate:

The lump under the chin 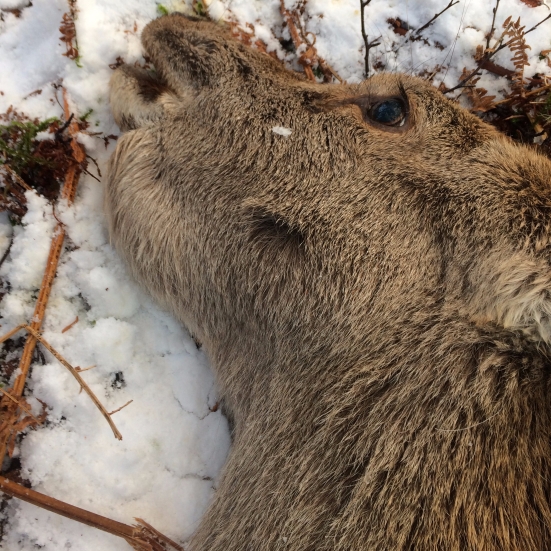 I had never seen this before, and was concerned it could have been a growth, or perhaps an abscess. My colleague, however, had seen something similar, and said we could cut the jaw open to find out more. 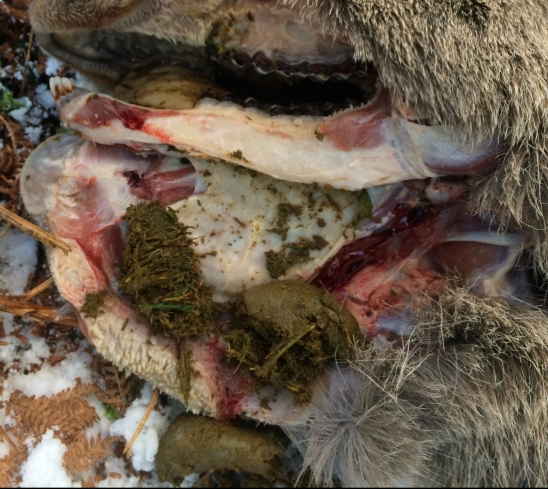 The lump was composed of compacted grass (which absolutely reeked). Clearly there was some infection on the go, not surprising given the amount of foreign matter that had built up there. This was evidenced too by the enlarged sub-maxilliary lymph nodes (see the photo below).

The compaction occurs when skin under the hinds tongue splits, perhaps cut by a piece of rough heather, or after an abscess of some kind. Once the split is present, every time the hind lies up to chew the cud, more and more food get stuck in the cut. Over time, the cud compacts, and the void under the tongue fills with fermenting foliage. Distinctly unpleasant for the poor lass.

Apparently, this most commonly is seen in older deer, which makes sense I suppose; as their teeth wear, they’ll be less efficient at breaking down fibrous plants and more likely to sustain an injury (but I’m happy to be corrected!).

Which brings me onto my next point:

This was an old hind. We usually age deer by their teeth, this is the most effective means, and there are various papers written on the subject. A deer’s age, like that of most ungulates, is determined by their teeth – once they wear out, the animal can no longer eat, and consequently starves to death. Another reason to brush up on identifying and ageing deer for management culling, removing these deer from the population prevents the slow suffering of weeks of starvation.

As you can see from the image below, the lower molars are worn nearly to the gum.

(I realise without a comparison image to a young deer, this image may not mean a lot! I will endeavour to write a post on the subject in due course. Honest.).

Which rounds us up to my final point of interest:

This is just a quick overview on body condition. Again, I will try and write further about it in future.

Below, we have the hind – the factors I pointed out earlier (muscle loss, prominent bones) can be seen clearly here. The wastage at the back end is particularly obvious, the sharp > shape of the rump is a clear indicator of lost condition.

Her coat too is rough, ‘starey’ and yellow. A lack of condition and bodily resources means she is slower to grow in her winter coat.

The next photograph shows inside the body cavity, after the deer has been gralloched (esophagus, stomach, spleen, intestines removed). This is perhaps a more meaningful image for those already acquainted with deer, but you can see the lack of any body fat within the cavity or around the kidneys.

We had over 70 consecutive days of rain in the Highlands recently, which has definitely taken its toll, on the hinds in particular, who have struggled to keep condition on, whilst trying to stay warm for the period of time.

This female had a calf at foot (also culled to avoid orphaning), which demonstrates an incredible strain on her biological resources, as you can see. Given that there is very little calorific value in the vegetation at this time of year, she would have been depleting her reserves just going day-to-day. In a hind in better condition, or younger in age, we would expect to see a good covering of fat over the psoas major (tenderloin), and a white jacket of fat around the kidneys, completely obscuring them. 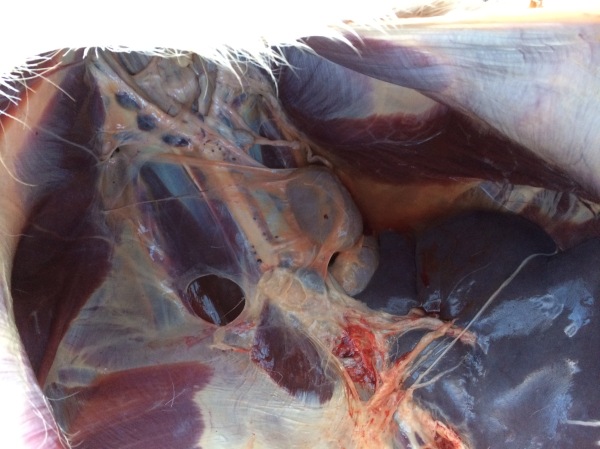 The final image, is merely to demonstrate further, the lack of weight around her hips and back – the spine was very prominent, and I could nearly wrap my hand around it, despite all the fur. 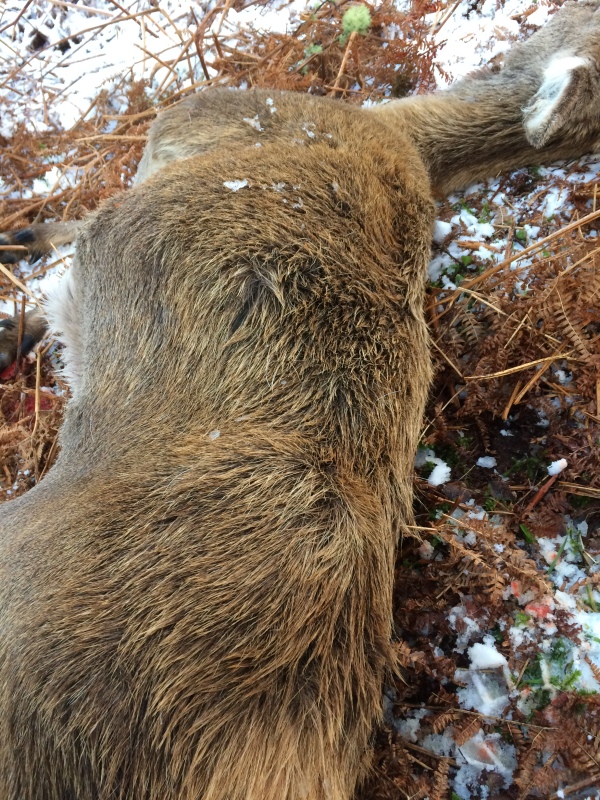 I hope you have found this post useful and interesting! I will try and get my act together and write more – it’s nigh on impossible once hunting season starts though to find the time! (And I know what I’d rather be doing…and that isn’t sitting in front of a screen!)

One Comment on “Deer Health – Jaw Compaction and Body Condition”